We’ve been going back to take a look at the season so far for Serie A side Sassuolo. In Part One we looked up until the end of September, and now today we will recap October, November and December.

Roberto De Zerbi’s side started the season very much sitting in mid-table, showing inconsistent results – with plenty of goals at both ends. By the end of 2019 things looked pretty similar for the Neroverdi as they sat in 13th place, 10 points away from any European places, and 5 clear of the relegation zone. 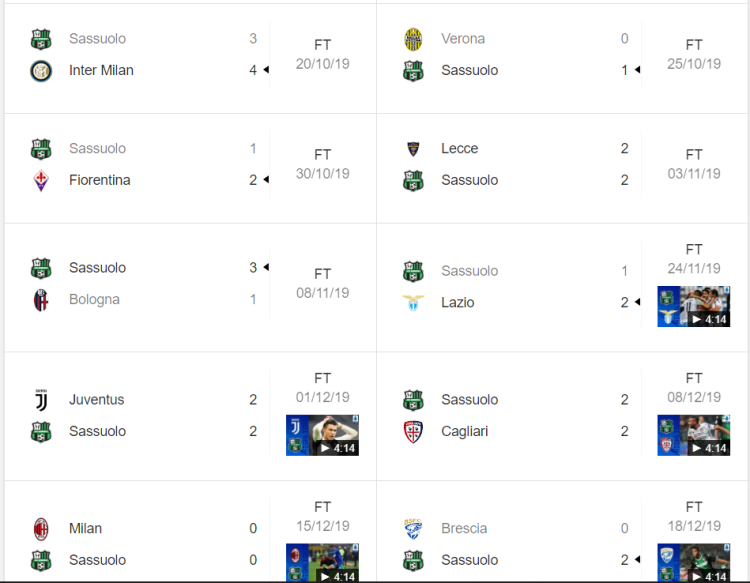 In the last three months of the year they had 3 wins, 4 draws and 4 loses (the final 2-1 loss to Napoli not included in screenshot).

17 goals conceded in that time shows the defensive issues in the first half of the season for Sassuolo. For the season as a whole at this point they’d let in 29 goals, with two other sides also conceding the same amount and two other teams allowing more. So a relegation battle esc defense, but only six other sides had scored more goals than  Sassuolo’s 29 scored – the same six teams who also occupied every European spot.

Having not known a whole lot about Roberto De Zerbi before this, we’ve started with a clean slate. In a word, De Zerbi is ‘flexible’ – and that’s both positive and negative.

He is able to adapt his tactics and formation to fit certain situations, like a different opponent or the changing landscape throughout a game.

However, he also chops and changes the team – often without much reason – to a frustrating amount. At different points in the season it becomes clear certain players are working and others aren’t, but in the case of someone like Jeremie Boga it took his manager a while to begin to trust him with consistent starts. While persisting with Gregoire Defrel who was not producing.

Even by the end of 2019 De Zerbi has tried four different players in the left-back position, unable to pick a favorite. The likes of Hamed Junior Traore, Filip Djuricic and Manuel Loccatelli have impressed when given time but continue to not consistently get minutes, be dropped after a decent performance and be replaced by the likes of Mehdi Bourabia, Pedro Obiang and Alfred Duncan all of whom have not shown as much talent since the beginning of the season.

While it does not seem at this point there is even one suitable centre-half at the club, nevermind two, it doesn’t help that the manager continues to rotate between five players in that area. Allowing two players to adept to find a partnership would be a better bet at this point.

Andrea Consigli is the obvious first choice in the team. He doesn’t stand out as being exceptional, but he also isn’t a liability. Towards the end of 2019 an injury to Consigli allowed some game time for 18-year-old Stefano Turati and 39-year-old Gianluca Pegolo.

Turati had a fantastic performance against Juventus, but did make a goal costing mistake in the next fixture, but he still seems a potential future star.

Right-back at this point is nailed down by Dortmund loanee Jeremy Toljan, he’s got a lot to offer going forward and the right side is far less often the source of dangerous attacks. 21-year-old Mert Mulder is playing the back-up, but at such a young age does look promising.

Centre-back continues to jump between the likes of Vlad Chiriches, Marlon, Gian Marco Ferrari, Filippo Romagna and occasionally Federico Peluso. No one sticks out as being particularly impressive, but giving a partnership a chance to blossom with consistent game time would be the best bet, two of Marlon, Romagna and Ferrari would probably be our choice.

Federico Peluso started off as the first choice left-back when the season began, but he was often caught out. De Zerbi had 22-year-old Brazilian Regerio, Georgios Kyriakopoulos and young Italian Alessandro Tripaldelli to pick from to replace him. He’s jumped between them all, and at this point doesn’t seem any closer to finding a full-time preference. Kyriakopoulos is the most impressive so far, but sticking with any of the three would produce better results than never letting anyone settle.

Switching between a 4-3-3 and 4-3-2-1 has produced a bit of variety in the centre of the field. Often the same players can be used in both systems, just obviously switching up their roles a bit.

Captain Francesco Magnanelli returned to fitness in October. At 35, he’s not the most mobile but he does bring some control, patience and balance to an area which is often surrounded by players far younger than him.

20-year-old Traore, Serbian  Djuricic and Ex Ac Milan player Locatelli are all interesting players to have in the centre of the field, and while it would be interesting to see all three play together, that would potentially leave an already lacking defense exposed, so Magananelli is important for balance.

Pedro Obiang and Alfred Duncan also still have on-and-off appearances for Sassuolo, but as the games go on it becomes apparent the other three are producing better performances.

Djuricic and Traore are both fairly attacking intent players. The younger Traore is quicker and dribbles more often, while 28-year-old Djuricic is more of a threat from shots around the area. Both are versatile and can play as a ’10’ or slightly deeper, and both are far more creative and cultured with their passing than other midfielder in the squad.

Locatelli takes a deeper position than the other two, but he’s a bit of an all rounder. His passing range is very good, he covers a lot of ground and can pick his moments to get further forward than his usual. He could do with getting a bit more involved with tackling, especially if playing in a team without the caution of Maganelli.

After a frustrating beginning to the season where ex-Chelsea winger Jeremie Boga couldn’t get consistent game time, despite obvious talent, he’s become one of the key figures in the side.

Boga, at 23 years old, appears to have real ability to become a top player. Despite only really having three proper first team seasons up until this point, with loans of varying success at Granada, Stade Rennais and Birmingham City, Boga shows not just talent, but importantly an end product and consistency.

Without a doubt, Boga’s ability to throw a game into life with direct running, and incredibly quick feet, is his best trait. He’s able to on a consistent basis end these runs with a shot on goal or a cross, rather than dribbling for the sake of it, he does it with a real purpose.

Domenico Berardi and Francesco Caputo are normally the other two parts of the front three, and both also look quite convincing. Berardi is still the biggest star at Sassuolo and  despite injuries he had a productive first half of the season, but probably not quite up to his high standards. Caputo is a reliable striker in his early 30’s, picking up poacher style goals and utilising his hold up play.

Forecast for the rest of the season

For the Neroverdi to properly kick on for the season past the turn of the year they’d clearly need to improve the backline. The January transfer window could be a big opportunity to do that, and a back up striker could be of use as well.

It’s unlikely they’ll challenge for Europe but they need some solid results in January to pull away from any potential relegation battle.

In the next update we will look at all of the games from the new year up until the season was interrupted due to covid-19.

Before finally covering all the post-break games at the end of the season.