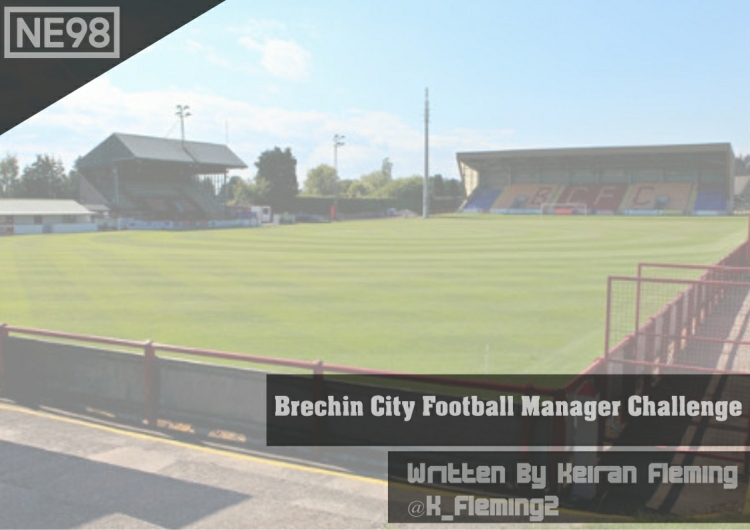 During lockdown my love for Football Manager (FM) has been reignited. A majority of the time I tend to start a career with my beloved Dundee United however I wanted to set myself a real challenge. My goal is to take a League 2 side to the pinnacle of Scottish football.

Each of the 10 teams in the league were put into a randomiser. I had my fingers crossed for either Cove Rangers or Edinburgh City which would have given me a relatively easy run for my first season. The FM gods decided to make it much tougher by handing me Brechin City.

Brechin have been relegated twice in a row and the club faced relegation for a third time before football was postponed in March. So my task is to not just get a team from League 2 to Premiership winners but to turn round the fortunes of a club that have struggled for the last 3 seasons. 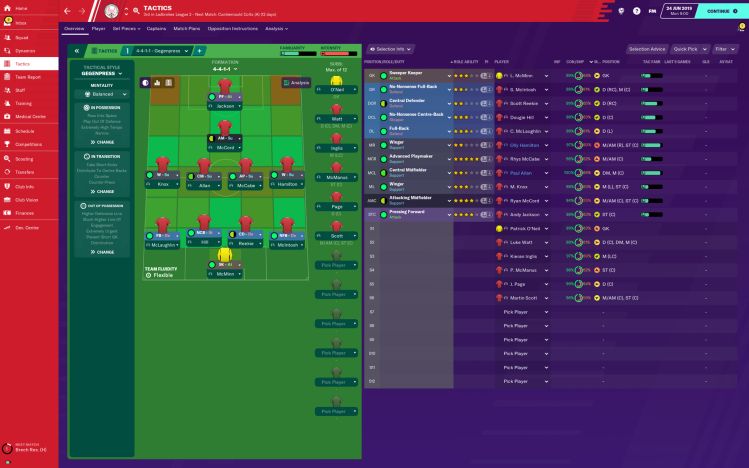 The First obvious problem with the squad is lack of depth. Identifying players that bring some quality to the side without a scouting team is extremely difficult. Trials were given out to everyone and anyone available.

A change in formation was also needed to suit the players already at the club.A classic 4-4-2 focused on getting the ball up the park as quickly as possible seemed to suit the ability of the players. I treated the group stage of the League cup as pre-season because the likelihood of getting through to the knockout rounds were slim.

After making 7 new acquisitions the first team looked ready for the pre-season challenge. Bringing Chris O’neil back after 2 seasons away for free seemed pretty obvious; he provides a little more strength in the right back area. The squad needed a bit more cover in center midfield  so bringing both Jack Paterson, on loan from Kilmarnock, and Scott Robertson, on loan from Celtic, in is key. Paterson is the most interesting prospect with only a year left on his contract, if he makes a big impact I might try to sign him permanently. Center back Lewis Bell was dropped by Celtic and he already looks like he is possibly my best defender.

Jack McCourt is by far the most talented signing I’ve made so far. The left back was let go by Ross County and signing him could prove to be extremely profitable in the future if I am able to sell him on. More depth was needed in the striker area and to be honest their current strike force needed some youth injected into it. Released Partick Thistle player Connor Higgins was signed with the hopes that he can make an impact now and also that he sticks around for a decent run in the team. The final piece of the puzzle was a right midfielder and former Falkirk youth player  Conor Langton seemed the only player available that could make an immediate impact. 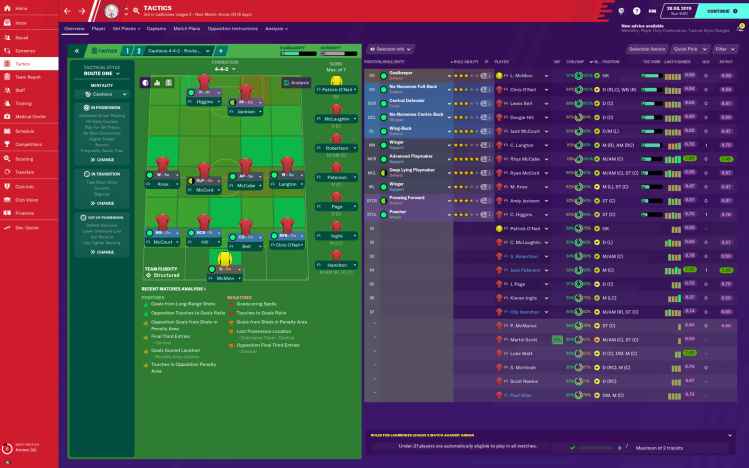 Now that a new look squad had been assembled it was time to start the season against Saint Johnstone. For this game I decided to experiment with a 4-4-1-1 pressing formation. Looking back it was probably the wrong team to change things up against but for our first competitive fixture against superior opposition we didn’t do too badly. Rhys McCabe had a really decent game against the Perth side but no matter how well he played there was still a huge gulf in quality between the 2 sides. We lost 2-0 which is a much better result than I was expecting. 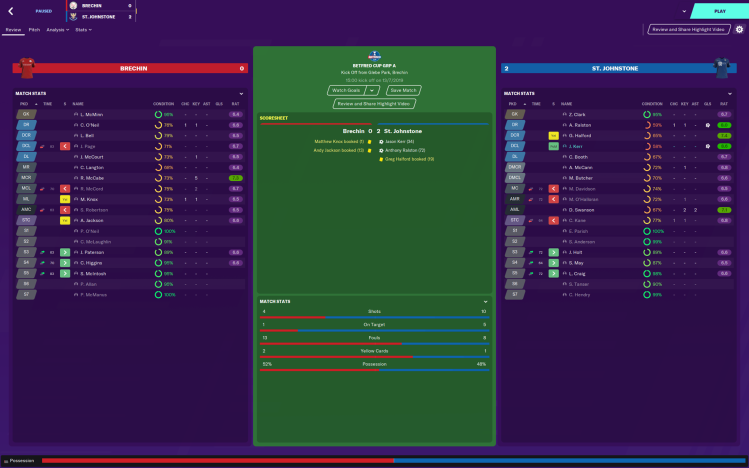 The second game against rivals Montrose showed how well the new signings could play with 2 of them getting on the scoresheet. A 2-0 win against a team in League 1 filled me with optimism for the games and season ahead. Sticking with 4-4-2 proved to be the ideal formation for this game, it allowed both strikers to have really good goal scoring opportunities. With Connor Higgins and Jack Paterson both scoring it suggested that so far the recruiting process had been successful but it really is too early to tell how positive these signings are. After the high of beating League 1 side Montrose next we were hit with a low when we faced Cowdenbeath. This was a painful defeat against a team who I deemed to be 100% beatable. I think the players I rotated in were either too unfit or just not good enough to start in the first team. It was pretty obvious that none of the players had a good game and we succumbed to a 1-0 defeat at home to Cowdenbeath. After the Montrose game I thought we could have a good run in League 2, after this game I realised the task at hand was going to be difficult. 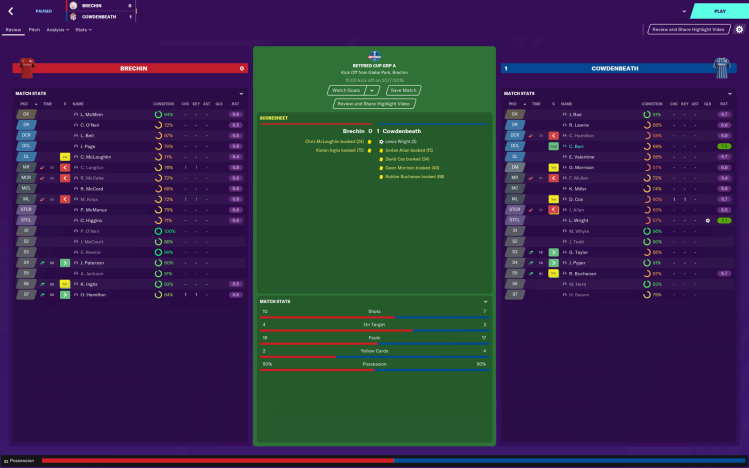 Dundee United were next and I was dreading it. My expectations were very low for this one and I fully expected to be thrashed. However, we were able to keep a clean sheet for 60 minutes before Declan Glass decided to score a screamer. At that point it felt as though it was game over but I was wrong. 10 minutes later summer signing Connor Langton scored, I was both elated and confused at the same time. The squad held on for another 20 minutes which meant it was now down to penalties. Of course after all our hard work we lost but there are still a lot of positives to take from the game. This loss now meant Brechin were no longer in the League cup which I was oddly pleased with. Now all resources will be focussed on the league campaign. 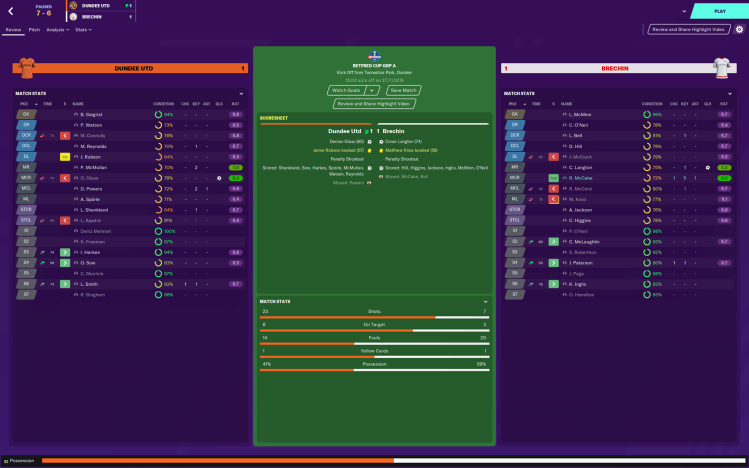 After an up and down pre-season and League cup group stage it was time to shift our focus on to a potential challenge for promotion to League 1. The first game of the League campaign is away to Annan and I really hope we get off to a positive start. A win could prove to be the first step towards getting Brechin to the premiership.