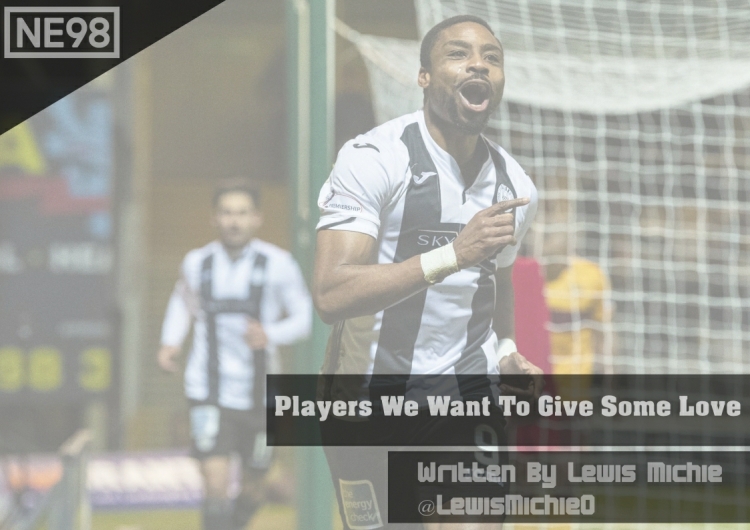 The Scottish Premiership season 19/20 is pretty much a distant memory at this point, but we’ve decided to g back at look at some of our favourite players from the campaign – or what there was of it – these five players could in some cases be described as underrated, but it’s unlikely any of them have gone without praise this year – but we want to give them a bit more. Obviously we’ve been impressed with Odsonne Edouard and Alfredo Morelos, as well as plenty other fan favourites, but we want today to look at some other names.

Saints striker Obika didn’t get off to the quickest start this season, it was his ninth game when he netted in a 2-0 win over St Johnstone in October. But the former Tottenham youth product would net another four goals before the turn of the year, and a further three after that. He twice scored against Hearts – the second providing the Saints with another season in the top tier – plus against Aberdeen and Motherwell amongst others.

A total of eight goals in the league made the Englishman St Mirren’s top goal scorer for the season, and his expected goals of 8.32 would suggest there wasn’t too much luck about it. He was far and away Jim Goodwin’s most dangerous player and even though he only recorded one assist, expected assists would suggest Obika could have created a further two, which would make him the most creative Saints player for the season.

Obika is a handful for defenders and even though shorter than some other strikers playing in the league (Although not by much), he’s one of the most physically challenging to play because he knows how to use his strength to his advantage. That might give off the impression he’s not a particularly cultured player, but many of his finishes this season prove he has elegance to his play.

Obika’s goals are well distributed between his head and either foot which just makes marking him an even more difficult task. Defenders have a lot more to think about while dealing with him than they do with more one dimensional players.

Turning 30 in September, Obika will not have any time to waste over the next few years as he looks to take advantage of his prime. His tally of 12 goals across all competitions matches his previous best total for a season, and of course this was in less than a full campaign. Finding a league, team and system that matches his attributes has gotten the best out of Obika.

Many Scottish football fans will not have been aware of the name Jon Guthrie before last Summer when the English central defender signed for Livingston. Since arriving, Guthrie has played every single minute in the Livi defensive line.

Just like their position in the League table, that defence has been the fifth best in the division all season and they’ve only conceded three more goals than Aberdeen and just one more than Motherwell.

When you have a look at what the Livi fans are saying, they are mostly very happy that they signed the former Walsall man, who has made them very quickly forget about Craig Halkett and Declan Gallagher.

Guthrie has also offered a lot to the offensive side of Livingston’s game as well. He’s scored six goals this season, becoming a real threat at set-pieces and making him the third top goalscorer at the club. He trails only behind Lyndon Dykes in Livingston’s expected goal chain, basically meaning he’s consistently involved somewhere in moves that lead to chances, as he has the ability to take the ball out of the Lions’ defence.

The 28-year-old may well have been linked to other clubs this summer if the pandemic hadn’t thrown a wrench into many transfer plans. While the defenders deal runs out next summer, there is supposedly an option for Livi to extend the contract for a year into 2022. This means there’s a good chance it would require a fee in order for another club to take Guthrie away from the Tony Macaroni before then.

If Chris Burke signs a new deal with Kilmarnock for the upcoming season – which he is in negotiations to do – he will enter his 18th season in professional football, turning 37 just as it enters the busiest period at the beginning of December.

Because of his age Burke is sometimes looked beyond, but he still remains one of Killie’s most productive attacking players. Scoring six times and assisting a further four goals in the league in 19/20, only Eamonn Brophy scored more.

Looking at expected goals and expected assists, it’s likely Burke’s output could have been slightly different this season and suggests how it might look next season. Burke actually only had an expected goal ratio of 3.82, but his expected assists were higher than his tally of 4, totalling at 6.31.

The former Rangers winger’s ability from set-pieces makes him an asset even in the twilight of his career.

Of forward players who played a significant amount of time at the club this season Burke also has the best shot accuracy, with a 54.20% rate. Possibly showing his experience in the way he chooses his shooting opportunities, and not snatching at half-chances some younger players might do.

Truthfully, Killie probably shouldn’t have such a heavy reliance on a player that is unlikely to be around for too much longer, with Burke now in a similar position to Kris Boyd in his importance to the team. While Brophy stepped up at the right time to replace the SPFL’s record top goalscorer, Burke’s replacement will need to be sought quickly, but in the meantime he’s still providing creativity for Killie.

Liam Polworth spent last season as one of the best creative players in the Championship, and after moving to Motherwell in the off-season, he’s now become one of the more creative forces in the Premiership.

Polworth isn’t someone you see on the scoreline particularly often, he scored just once in the league this season. But he loves to provide chances for his teammates, racking up eight assists throughout the campaign. The former Caley player actually had 3.56 expected goals this season as well, suggesting he could add some more goals of his own in the future.

Although only hitting the target with 11 of his 41 shots this season would suggest Polworth could choose his moments more carefully.

The 25-year-old isn’t just the man adding the final pass or cross before a goal, he’s a metronome in the middle of many of ‘Well’s attacking play. Providing 37 key passes this campaign and consistently linking together progressive moves for Stephen Robinson’s side.

It’s not often you see praise for strikers at Hamilton Accies, but Marios Ogkompoe and David Mayo’s partnership last season began to impress with their ability to be an nightmare for opposition defenders.

Both strikers have shown they are not easy to play against, but it’s Ogkompoe who has added goals to his attributes. The Greek’s tally of six this season had already surpassed Mickel Miller’s 5 last season and was two goals from levelling the 8 of Carlton Morris in 15-16, Ali Crawford in 16-17 and both David Templeton and Dougie Imrie the following term. Meaning had he been given the remainder of the season, Ogkmpoe stood a chance of being one of Accies most lethal goalscorers in years. Only one player has ever netted double figures for Hamilton in the top flight – Tony Andreu’s 12 in 14-15.

Ogkompoe actually could feel slightly frustrated he didn’t score another 1 or 2 goals this season, he had an expected goals ratio of 5.46, obviously less than his eventual total, but that  expected goals figure excludes penalties, which he scored two of in 19-20.

When you look at expected goal chain per 90 minutes at the club – basically a player’s likelihood of being involved in a move that results in a goal scoring chance – Ogkompoe has a 0.48, better than any of his teammates. So he’s actively involved in many of the positive things the team does.

At 25-years-old, Ogkmpoe will be feeling as though another good season could interest some clubs either further up the table or in England. The fact he can interact so physically with defenders and has added the ability to score goals to that makes him desirable to many sides.