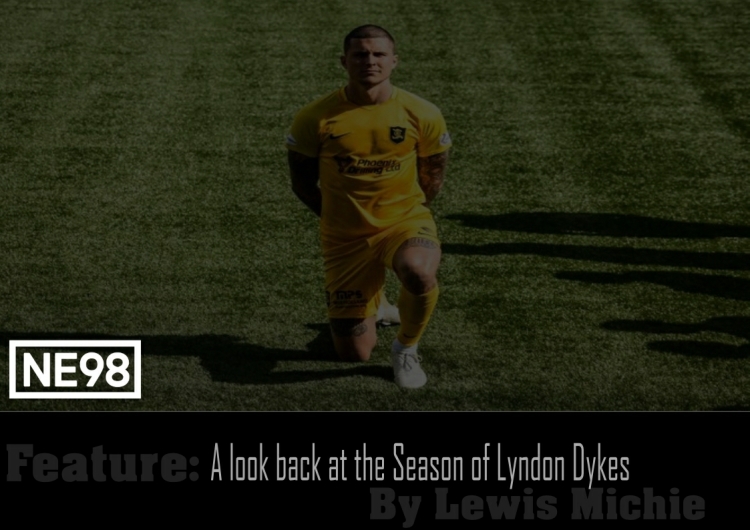 Before the shutdown Lyndon Dykes had scored 12 goals in all competitions this season, an impressive haul having just stepped up from the Championship. That has lead to transfer links and calls for a Scotland call-up. We’ve had a look back at all twelve goals to see what Dykes is all about.

So while I’ve taken notes on each individual goal, I’m not going to go through each one individually – but instead I’ve found a few patterns in there, and I’ll use some key examples to put them in action.

As everyone knows, strikers come in all sorts of shapes, sizes and styles. Dykes At 6,1″ is a big lad, not the biggest in the league, but he’s certainly a threat in the air. He’s also got a fairly lanky frame but has a burst of pace when it’s required and is more agile than players of a similar size often might be.

Taller strikers can often be pigeonholed as a ‘target man’ and as is the case here, they’re often much more than that. So let’s have a look at what Dykes does best.

A high amount of Dykes goals come from cut-backs, and in some of these your instinct is probably to criticise poor defending, as Dykes – Livi’s striker – somehow goes unmarked in the box. But he does this with such regularity that you have to give his movement credit.

3rd goal of the season Away at Ross County:

The goal against County is almost certainly the worst example of poor defending on Dykes for this type of goal. While you can still pick apart the defending in others, they at least make the Striker work a little bit harder than that.

Dykes appears to have a more deliberate style of goal than some of the more ‘right-time, right-place’ strikers in the league at the moment. He’s perfected the hanging around the edge of the box until the winger overlaps and then jogging towards the near post run.

This is where a high percentage of his goals come from.

Everyone is well aware that Dykes, while not ‘just a target man’ can very much give defenders a tough time in the air, as Christopher Jullien learned at the Tony Macaroni.

But often the former Queen of the South man can prove to be a little bit more delicate than that, as he also gave an example of against Celtic:

5th Goal of the season, at Home to Celtic:

More of a route-one type pass, but the pace to get in-behind and technique on the lob were probably the first time Dykes showed this side of his game in a Livi shirt.

He’d go on to do a bit more of this later on in the season where he’d really hit a run of form. But to do it without the stream of momentum spurring him on, as well as in being against the Champions is another thing all-together.

Dyke’s form across the season has been interesting. He got the hot-ish start he’d have wanted in the League Cup with a goal each against Forfar Athletic  and Falkirk, and while both were fairly scrappy that set him up with a bit of confidence going into the league campaign.

He scored in both his 3rd and 4th games of the season, against County and then St Mirren – which is when a lot of people started to notice him a bit more, and of course were including him in their fantasy teams.

A small period out injured meant September was goal-less for Dykes, he only played 73 minutes across the month, but October started with that goal against Celtic.

Interestingly, that’s where things dried up for a period. at the start of October, 5 goals – 3 in the league – Dykes had made the step up nicely.

But it took another two months before Dykes scored again. An ankle injury did cost him three games in that time, but he still played near 500 minutes without finding another.

Dykes returned to scoring ways against Kilmarnock, before netting a hat-trick against Ross County two weeks later and then scoring at Pittodrie the next mid-week. Meaning He’d matched the tally for the first five months of the season within the month of December – bringing his total to 10.

The goal against Killie is a similar example to earlier, a near post run – although this time more pace required as the defender matches his run, with a glancing header – which is similarly become a bit of a staple of Dykes’ game.

6th goal of the season Away at Kilmarnock:

The goal against Aberdeen was similar, on the other side, but terrible defending from the Dons left Dykes with an unmarked header – but again, a near post run to meet a cross.

Of the ten goals Dykes scored in 2019 for Livingston, six of them came at the near post, or on the near post side of the penalty spot. One of these was in the game he scored his hat-trick against Ross County.

The other two against County are different types of goals. The second is a simple tap-in from a rebound, but the first is an example of what a more confident Dykes began adding to his game around this time.

The first goal is the one that stands out here, Dykes receives the ball on the edge of the area, turns into space and hammers the ball near-post, and crucially, does so fairly early.

Again, strikers come in different types – Many are clinical in different ways. None of Dykes goals involve a couple fake shots to evade defenders, or going round the keeper, or taking it close in before a clever chip.

Most of his goals involve taking the shot on early, and as becomes more often later in the season – sometimes barely inside the box.

The winter break certainly came at the wrong time for Dykes. He scored in the return from the break against Raith Rovers in the Scottish Cup – a composed one-on-one, again taken early. But would only score once more after that.

That goal came against St Mirren, and also falls into the category of taking on his shot early, as well as serving as an example of the pace Dykes has when required.

12th goal of the season at Home Vs St Mirren

That’s an overview of the type of goals Dykes has netted this season, with a few examples – let’s round-up by looking at what he is good at:

Of course, if for example you are a manager considering signing Dykes this season, you have a few things to consider:

As usually happens with any player at a club like Livingston that has had a good season, Dykes has had links to transfers to other clubs. While the temptation here is obvious, often players look to move too quickly – and Dykes can probably have another successful – maybe even more successful campaign next season.

The clubs in Scotland likely to have the cash to sign him probably don’t require Dykes at this time, and wouldn’t pay the cash some English Championship sides might. Dykes would suit many sides down south, but that is of course always somewhat of a gamble.

In terms of his international future, Dykes is certainly worth Scotland attempting to prevent going to play for Australia. If international friendlies still happened as often, it would be a no brainier to cap him now, but instead I’d suggest he’s in a pool of 5-6 strikers competing for 3 spots in a squad – but a lot can change between now and when Scotland eventually have another game.