As we all discuss how to appropriately deal with the delay to the season forced by the coronavirus outbreak, the topic of league reconstruction has come up again. Now could be as good a time as any – it solves many issues for the SPFL and there’s plenty of time to implement it. However, as shown with pretty much anything in Scottish football – it could be tricky.

In order to get these changes through, it’s my understanding the SPFL’s proposals will need approval from 11 of the 12 current Premiership sides, and a majority of the clubs below the top division.

In order to get many of these members on side, it’s important to draw up a list of ‘Must-haves’. These are the details that any reconstruction proposals will need to even stand a chance.

I’d also suggest that sweetening the deal by changing the way prize money is distributed, and giving a bit more money to sides finishing in the bottom half of the Premiership to fill a gap left by missing out on big fixtures, could help to push through changes.

We’ve got two proposals, but first of all – lets look at what both will include.

Any League reconstruction proposals must have:

A. A way to guarantee  4 league matches between Rangers and Celtic in any given season (To the same extent we currently have, obviously in the unlikely occurrence one finishes bottom half, this would not happen.) – While this isn’t popular with fans of many other clubs, it’s simply integral towards the TV deal and the cooperation of both clubs.

B. No side will drop down a division. This will clearly help get the likes of Hearts, Partick Thistle and Stranraer on board. To a lesser extent, also Brechin City – although most suggestions right now will not involve them going down anyway. In-fact in one of our proposals a majority of sides below the top tier will technically jump UP a division.

C.The System of play-offs can change, although will need to be done in a way that prevents clubs that already benefiting in some way from feeling as though they’ll be disadvantaged the next season.

D. The number of fixtures played by a club in a regular season should not change drastically, some solutions can be imposed to adjust to allow an extra week or two of fixtures, but this is best avoided.

Our first, and more detailed, proposal is an idea we’ve altered from Finlay Jack (@Finlay_Jack5 on Twitter).

Save clubs like Annan needing to go Elgin, Peterhead etx and vice versa.

2 down, 1 automatically up in each tier. 2nd-5th in a play-off, with the final at Hampden.

A lot of the base ideas we like – but there are a few things we wanted to change.

We’ve kept the 14 team Premiership, with a twist.

And Also the regional third tier.

First of all, this system would take the total SPFL clubs from 42 to 50 – meaning 8 clubs would be promoted from the Lowland/Highland league.

Instead we propose bringing up four teams – based on league position, and arranging the leagues in this format: 14/12/10-10.

We will also have different play-off systems throughout the leagues, again this is down mostly to attempt the keep clubs on side. Many of us would like 3 automatically down and 3 up (2 automatically and 1 via play-offs) to keep things interesting, or Finlay’s slightly more conservative approach, but it’s unlikely clubs will go for it.

Another change we’ve made is making the split 7/7 in the Premiership.

This is for two reasons, first of all it avoids teams playing more games in a season that they already do, and secondly it prevents uneven number of games between  top half and bottom half sides. The split already provides silly looking results (Currently you often see the 7th placed team finish with more points than 6th and even sometimes 5th place) so we don’t want to make that worse.

This does mean uneven numbers for these mini-leagues, but it simply means of the 14 game weeks, each side has 2 off.

To satisfy this, it would likely require altering the season start or end date, shortening the winter break, or adding an extra round or two of mid-week fixtures. As there are the same amount of fixtures, but more individual game weeks.

Let look at how this would all look…

*League placings all based on current standings* 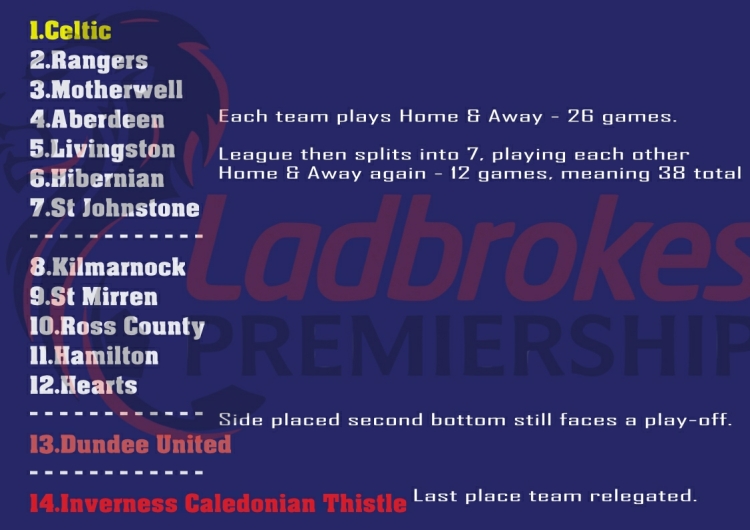 Ayr United and Dundee are likely to consider opposing this due to how close they are to Inverness in the league.

For the relegation play-off, it’s preferable the format is changed to semi-finals involving the Premiership side, as opposed to the current tiered format – but that may be hard to push through.

The Championship is where to begin to see further change. 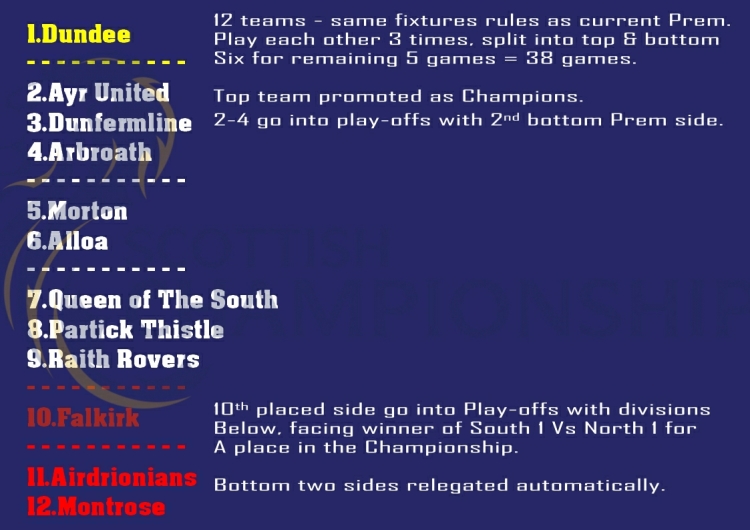 With the league extended by two teams, and already losing 2 sides, the top four of League One are promoted.

East Fife may oppose this as they sit just two points outside of the play-off spots.

Game format is the same as the current Premiership in terms of split etc.

This means two more rounds of fixtures than usual, although changing the play-offs to involve just two rounds (Semi-finals involving Prem side, and a final) may elevate this.

Another solution may also be alteration to the League Cup to allow an earlier start to the Championship season.

Relegation changes, adding a second automatic relegation spot, this might sweeten the deal for teams in the third tier. Sides who might be impacted by this change may be less likely to shoot it down as they are already benefiting – League One teams being promoted and Partick saved from relegation – Risk Vs Reward.

Now, the third tier. Technically the fourth tier is wiped out as the third becomes regional, and again this is why two automatic relegation spots are introduced, as it provides sides in the tier below the same chance at promotion as they previously had. 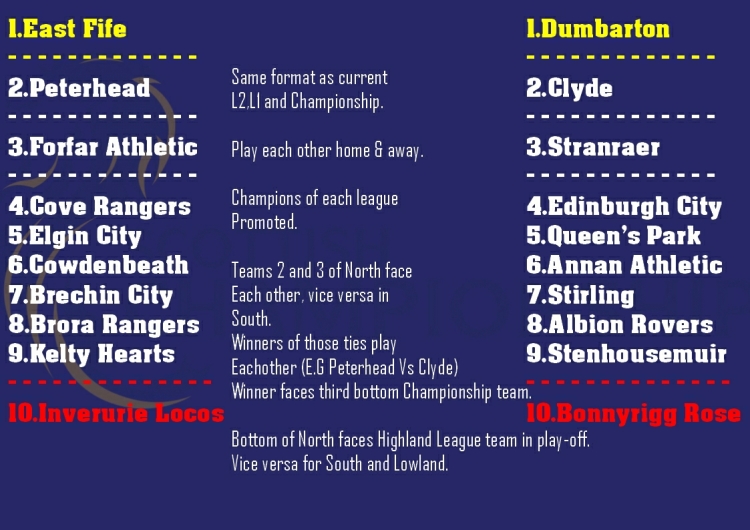 East Fife, Peterhead, Forfar, Dumbarton, Clyde and Stranraer are the only sides not moving up a league in this format change, and Stranraer are technically being saved from relegation – and all of them are given a greater chance of promotion to the Championship with these changes.

Sorting these teams into regions does prove difficult as there are far more central belt teams.

Although the likes of Kelty and Cowdenbeath are Fife based (As is, obviously, East Fife) so the results here aren’t horrendous.

Of course relegation from the Championship could cause issues, so a team who finished mid-table in League One South in the first year can be asked to move to League One North (Stirling and Stenhousemuir and likely candidates) should it be required.

This is unlikely however. The worst case scenario would likely be promotions for Peterhead and Cove – leaving Elgin as the most northern team by far, with, for example, Queen of the South, Airdieonians and Morton all relegated.

In this case – with the League One North requiring two sides, it’s likely Stenhousemuir and Stirling would shift over, with the three relegated sides all joining League One South.

Of course if one of Stenhousemuir or Stirling were promoted as well, then Bonnyrigg or Edinburgh City become candidates to switch – again a lot of stars need to align for all of this.

In terms of promotion play-offs, the 2nd placed side and 3rd placed side of each division would play each other, followed by the winners of North facing the winner of South, and finally the victor of that facing third bottom of the Championship.

Peterhead Vs Forfar in North, and Clyde Vs Stranraer in the South. If Peterhead and Clyde win, they play each other, with the victor facing Falkirk for a place in the Championship and following season.

This is the same format as the current Premiership play-offs, it’s obviously quite heavily weighted towards the Championship side, but that is by design to make them more likely to vote in favour.

Additionally, the format makes it difficult to arrange this differently.

One legged, drawn play-offs could be discussed for the first and even second round to reduce fixture congestion.

League One North’s bottom side will face a play-off  with the Highland League Champions, and the bottom of League One South would face the Champions of the Lowland League. Retaining a link with the pyramid sides, and enhancing their chances of promotion.

Who does this benefit:

Another, potentially more simple solution is to extend the entire SPFL to 44 teams, promoting just Kelty Hearts and Brora Rangers.

The Premiership would still extend to 14 teams – promoting Dundee United and Inverness. And would still adopt the 7/7 split.

Raith Rovers and Falkirk would both replace them in the Championship, with Cove Rangers and Edinburgh City jumping to League Two – and obviously Kelty and Brora take their places.

This would likely cause more divide however, as less benefits will be handed out.

Dundee, Ayr United, Aidrieonains, Montrose and Bonnyrigg Rose could all pose opposition to clubs they may have caught being promoted.

Although this, again, would prevent any relegation.

It would certainly suit the League One clubs that benefit, plus the League Two clubs technically all moving up a tier. I don’t think they have a vote but I don’t image Brora or Kelty would be happy though.

The simple facts of this are that there is no easy answer. I’d argue we are most likely to see temporary measures, seeing the formats change for a season or two, with promotion and relegation designed to return to the regular set-up. The SPFL have set a rod for their own back so to speak, and in fact, the complexities of Scottish Football to its very core make this a incredibly difficult task.