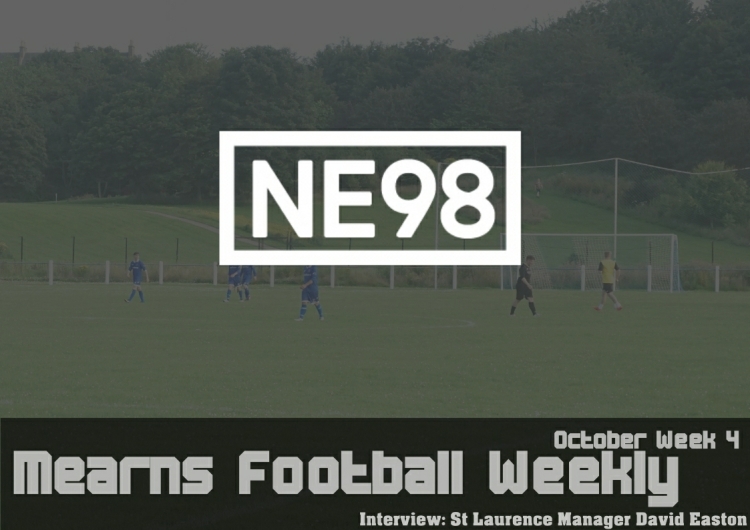 It has been a strong start to the Premier Division season for Aberdeenshire AFA side St Laurence, as they sit fourth in the league. Having survived following promotion last season, coach David Easton set the task of pushing further this term. Thus far with five wins, two draws and two loses the Saints are certainly showing they’re capable of that.

Last weekend it was a 2-0 win for the Laurencekirk side over Old Aberdonains in the league. Following on from that success, NE98 caught up with manager David Easton.

Grit and determination got us through Saturday’s game. On a better day, or a better pitch, we could have scored more goals to make the score line better than it was but defensively we were solid and deserved our 3 points.”

In terms of the league season so far, it’s clear to see Easton is pleased with his side, saying:

We are ahead of where we expected to be but deservedly so. We can compete with the top teams in the league, being consistent is the real test for us.

We have more of an identity in how we play this season, regardless of who is starting or the formation we go with, which is very pleasing to see week in week out. The best quality we have is our work rate, it’s the minimum you need to be successful and our guys always show that regardless of the performance.”

Elsewhere in the Premier Division Cowie Thistle picked up a fairly comfortable 7-1 victory over Echt. This looks a fairly impressive result considering Echt are second and would have been a point adrift of top spot had they won.

They sit two positions behind St Laurence, with Cove Thistle right inbetween, but are only three points behind their Mearns rivals – albeit after playing a game more.

Bervie Caledonian suffered a tough to take 6-0 defeat to Rothie Rovers – although third place and title challenging Rovers are not likely to be the type of team Caley will be requiring results from this season, anything against them is simply a bonus.

Dropping down a division and in the Division One East it was a 3-1 win for AC Mill Inn over Ellon Thistle. Inn are fourth, with two games in hand on top spot Kincorth – although the granite city side have yet to drop points.

So a more realistic aim for Inn may be Alford who sit second, having played a game more – If Inn win their game in hand they’d be just two points behind.

Division One North side Stonehaven Athletic were in cup action, they were beaten 3-1 by Glendale Youth in the first round of the North of Scotland Cup.

It was a disappointing weekend for Stonehaven Juniors in the third round of the Scottish Junior Cup, beaten 4-0 by Ellon United.

In the Montrose and District Welfare League, Johnshaven were beaten 3-1 by FC1320. The result means second placed Johner are now seven points behind their opponents, but do have a game in hand.