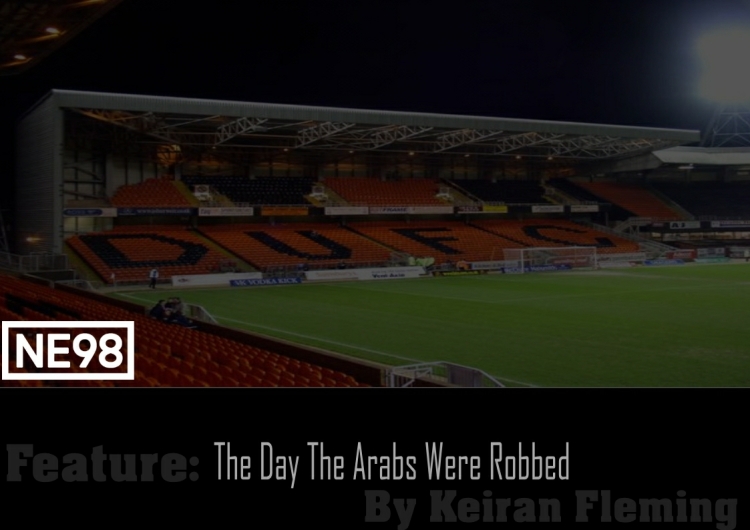 After winning the Premier division for their first and only time at the end of the 1982-83 season, Dundee United would embark on an exciting European Cup run (now known as the Champions league).

With both Jim Mclean and an outstanding squad that included the likes of Hamish Mcalpine, Paul Heggarty, Davie Dodds and Eamon Bannon, there was a real buzz about Tannadice.

A lot was expected from this side that was full of quality and potential, However, they did not live up to that expectation domestically during the 1983-84 season. Finishing third after coming off the high of winning the league, getting knocked out in the Semi of the League Cup and  the quarters of the Scottish Cup. This meant they finished the season without a domestic trophy.

This was all overlooked due to an inspiring European Cup run that would see them be eliminated in the Semi-final, denying them of a fixture against European giants Liverpool in the final. However, there was more to this elimination than just Roma having more quality than Dundee United.

The Arabs had a relatively easy start to their European Cup campaign against Maltese side Hamrun Spartans. United beat the minnows 3-0 both home and away making the aggregate score 6-0.

Next up was a much tougher challenge against Standard Liege who were Cup winners’ Cup runners up in 1982 to Barcelona. The Tangerines found it to be tough challenge away from Home with the result being a scoreless draw. The return leg at Tannadice  was where United were really able to show their class. 2 goals from midfielder Ralph Milne put the Arabs firmly in control before half-time. Goals from Paul Hegarty and Davie Dodds in the second half meant the tie with the Belgian reds had been killed off.

Rapid Vienna in the quarters would prove to be a much tougher test. The first leg in Austria was a difficult one for the arabs and resulted in their first loss of the European Campaign. A 2-1 defeat away from home meant that it was now down to Dundee United to put up a fight at Tannadice to keep the dream alive and that’s exactly what happened. A goal from Davie Dodds meant United got through the quarter finals by the skin of their teeth.

The Semi-Final would put the Arabs face to face with Italian Champions Roma. Over 20,000 people turned up for the first leg at Tannadice and Dundee United put on a show. Both Davie Dodds and Derek Stark were able to score against the giallorossi giving them a 2-0 lead into the second leg at the Stadio Olimpico. After the game Roma president Dino Viola accused the home side of taking drugs due to their tremendous work ethic.Then everything changed.

Around 70,000 fans filled the Arena. As Jim Mclean’s men made their way onto the pitch they were bombarded by fruit. Midway through the Second half the Arabs were down by 3 goals to nil. Then the whistle was blown and the Roma players stormed the Dundee United bench. That night Jim Mclean was the most hated man in Italy. Threats and abuse was thrown at the manager by the players. Assistant coach Walter Smith and reserve goalkeeper coach John Gardiner were all that stood between Mclean and Roma’s starting eleven. Once the game was over who would have thought 27 years later in 2011 that a revelation would reveal the dark secret that surrounded Roma’s victory.

Riccardo Viola, son of former Roma president Dino, revealed that a 100 million lire (£50,000) bribe was paid to the French referee Vautrot before the second leg. The bribe was paid through a middleman who was close to the frenchman.

Once Jim Mclean heard the news he told the Daily Record:

Roma were under pressure because the European Cup Final was being played in their own Olympic Stadium but it is no excuse to stoop so low as to cheat their way there.

I’m glad the truth has come out and, now it has, I feel for my former players and Dundee United fans who were denied the greatest game the club would ever have played.

A European Cup Final would have been wonderful for everyone.

We had the players to beat Liverpool in that final – we had the players to beat any team when we were on song. I would have loved the opportunity for them to have played in the Final because some of the results they achieved that season were unbelievable. The defeat left a bad taste in my mouth and I’m sad to say we were right, even though we never thought of asking for a probe and accepted we lost over two legs.

However, a couple of months after the match Ernie Walker told me had done everything within his power to have UEFA look closely into the game.

He was convinced an attempt at least had been made to bribe the referee but UEFA brushed his suspicions under the carpet.”

Years on it is claimed that Jim Mclean had a copy of the second leg in his Broughty Ferry home that he refused to watch.

It has been over 35 years since the game in Rome and it remains the closest the Arabs have come to being in the final of the most prestigious competition in club football.

That dream was dashed not by being beaten by a better opponent but by the greed of two men – Roma president Dino Viola, who was banned for four years after being found guilty of bribery, and French referee Michel Vautrot, who would later become head of the French Referee association until 2003.

Roma were punished with a years suspension from European football however, this would later become a fine.

This was not the saddest story that came from that game. The penalty taker that put Roma through to the final would commit suicide. Di Bartolomei killed himself on his balcony on the 10th anniversary of the final against Liverpool in 1984 which they lost on penalties.

If it weren’t for greed and corruption who knows what Dundee United could have done to Liverpool at the Stadio Olimpico. Maybe a star could have taken its place above the terrors crest.