If you’ve been paying any attention you’ll know that if we are being totally honest, here at NE98 we have a core of Aberdeen supporters – not all of us, some are unfortunate enough to support Dundee United, but afterall the NE does stand for North East.

Of course that isn’t all that important, as we try to stay as impartial as possible – but today we are looking to analyse Aberdeen’s current team, with a focus on one of their newer signings, Funso Ojo – using their recent 3-0 victory over Ross County as a reference point.

Being a season ticket holder at Pittodrie is particularly relevant to this article seeing as I’ve seen quite a lot of this present Aberdeen side, and even more of the sides of the past few seasons – plus I’ve got access to a RedTV account to get some stills to illustrate some of my points.

The team – players, systems and formations

Aberdeen have had this knack this season of doing one of two things with their style of play. Either it’s actually fairly neat, tidy and fun to watch (Wins against ROPS, Chickura, Hearts and Ross County at Pittodrie) or it’s a difficult to watch, world record matching amount of time with the ball in the air drivel (Basically every away match, and the home game to Rijeka.)

This of course was a common sight all too often last season for the Dons faithful, I shudder to think how many commentators uttered the collection of words that is – “McKenna, to Considine, back to McKenna, now back with Considine, slid to goalkeeper Joe Lewis, Here’s McKenna again – he hits it long, *Opponent* gathers back possession” rinse and repeat.

Now, one slightly relieving trend that appears here, at least for those that regularly go to Pittodrie, is that it seems home games are becoming a little bit more bearable to watch – as long as you aren’t playing Croatians – unfortunately those of you who head off to away games are less lucky, but that’s okay because most of you are probably fairly out of it by 3pm on those days anyway.

The key difference being the style of play. While generally Derek Mcinnes can stick with the same line-up and general formation from a home game to an away game, the long-ball, overly cautious displays remain away from home.

The hope for many Dandies, is that while they understand changing the system at a place like Celtic Park, they’d like to see games at the likes of Rugby Park played as closely to the style used at Pittodrie.

So what does that look like? Well for a start the formation is somewhat of a 4-5-1, but describing the midfield as a five would be somewhat misrepresenting how things are done.  Funso Ojo sits the deepest of the central three, Lewis Ferguson and Craig Bryson both work immensely hard out of possession and are both expected to link attacks and at times take turns supporting either the wingers (More often Bryson) or Cosgrove up top. The wingers, which has more often than not been Ryan Hedges and one other (Against County it was Niall McGinn) will do as you’d expect from a Mcinnes wide man, regularly swap sides, sometimes drift inside, other times hug the touchline, they are the least predictable of the entire team – especially Hedges.

Now we can get to the main part of the article, where we will focus on how this man’s presence influences those around him.

The Belgian signed from Scunthorpe – conceding a penalty in his debut game and then being sent off against Rijeka meant he had a rocky start – and while he’s certainly looked better against County, some are yet to be sold on the midfielder.

It might take a while for punters to properly appreciate the work Ojo does, afterall by his own admission he isn’t the guy who gets supporters off their seats, he looks to allow his teammates to do that. When many think of a deeper midfielder, certainly in Scotland at least, they think the main objective of that player is tackling – and while Ojo got through a decent amount of that against County, it doesn’t appear to be the main reason Mcinnes recruited him.

As stated before, too often last term the centre-backs would take the ball and see what, at least in their eyes, was the grand canyon, and then the rest of their team – their only option was to play it long. That’s obviously a bit dramatic but at the end of the day, centre-backs at Aberdeen aren’t going to play the ball on the ground like they’re a Manchester City centre-half, their passing really isn’t up to that standard, understandably.

That’s where Ojo comes in, he drops deep – taking the ball from the defenders, or often Joe Lewis himself at goal kicks, progresses the ball to around the half way line and then dispatches it to the five teammates ahead of him, or often 6 or 7 once the full-backs get up to support, and then drops back in again to provide cover in the instance of a counter attack. 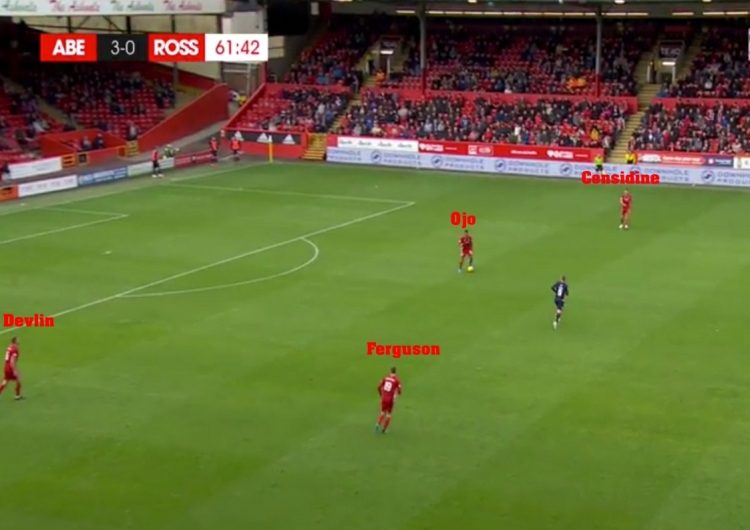 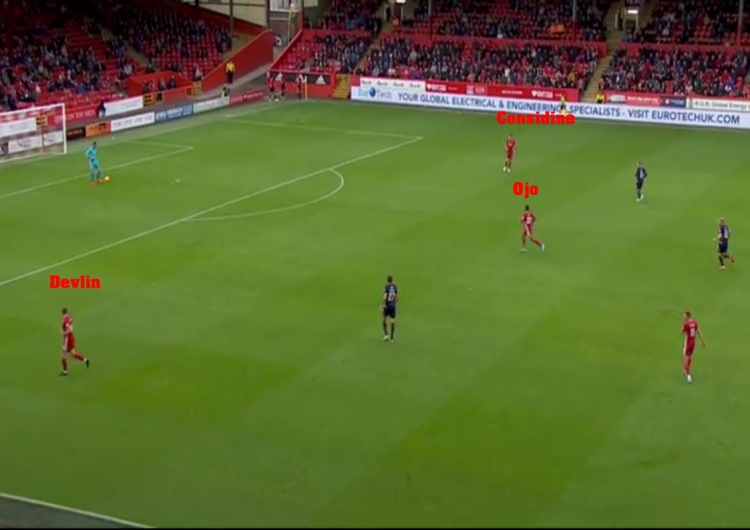 The influence on other players

Often last season the likes of Graeme Shinnie or Lewis Ferguson would attempt to do the job Ojo does now, not only were they not as skilled at this role – they were wasted by not being able to get further up the pitch, especially Ferguson who has a bit of everything and causes a lot of issues with his dribbling and link-up play.

Often of course, it would be Stevie May or Greg Stewart in the side as well, which meant one of Ferguson or Shinnie, or of course a full-back, would have to stay back to prevent opposition breaking on the counter. This also caused an issue of congestion in the middle area of the park, with too many players trying to do the same job.

Seeing as Bryson and Graeme Shinnie have some many similarities, So far Bryson looks to play very much like Shinnie just without a beard or as many yellow cards, it makes it easy to see the influence Ojo has on the two midfielders sitting ahead of him – simply put, he offers them freedom.

(The Freedom Bryson and Ferguson are given is very much on show here as Ferguson earns the Dons a penalty. Michael Devlin was able to step up into space he often couldn’t get last season, player a chipped ball in behind – with more purpose and direction than the hopeful long balls often seen last term, and Ferguson and Bryson were allowed to fill that space, much to the surprise of the County backline, causing a bit of havoc.) 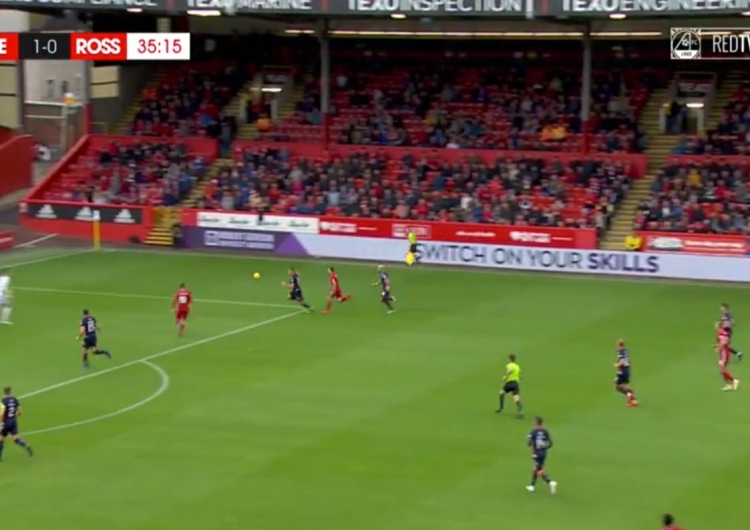 This is the same for the full-backs, against County that was Zak Vyner and Greg Leigh. At the very least they’ll be in line with Ojo during the first phase of an attack, but they’ll then push on further. Vyner’s strengths probably don’t lie in his attacking, but Greg Leigh certainly has a lot to offer on the attack.

(Here you see a good example of Vyner and Leigh being able to push on, with Ojo staying back – opening up space and providing security on the potential counter, this also demonstrates how this then gives the full-backs a chance to progress the ball) 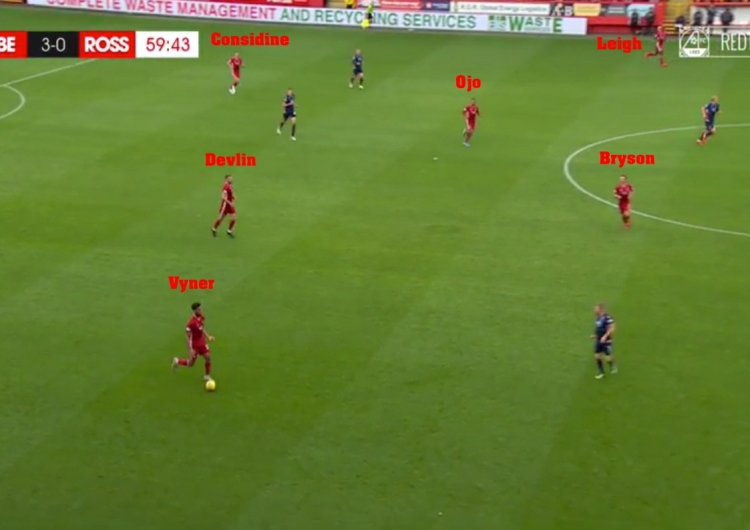 Due to the high line of the full-backs, this also offers a range of freedom to the wide men in Derek Mcinnes’s side. During the days of Johnny Hayes and Niall McGinn flanking Adam Rooney, they were a nightmare for teams to deal with. The could hug the touchline or drift along the box, pop up in the box on the end of the cross or send one in, work 1-2’s with their full-back, constantly switching sides and basically creating havoc. If you played a strict man marking system your backline would end up all over the place, if you played a more fluid defensive routine, then you’d have to be near perfect and very concentrated in your passing on of duties to ensure no one got free.

Ryan Hedges is not exactly like Johnny Hayes, but he still offers the range of crossing and finishing ability, willingness to interchange with McGinn and change of pace that the Irishman did. Additionally, he’s far more comfortable coming inside and often playing as a number 10, creating space for his full-back and scoring goals like he did against County where he has the freedom to drift in to the back post.

(McGinn ends up missing here, but you can see the overload that Aberdeen can create, and the way Leigh is able to progress to area’s like this one mean his crossing ability is put to good use. The advanced nature of Leigh and Vyner (Just out of shot) allow McGinn and Hedges to get as central as they are.) 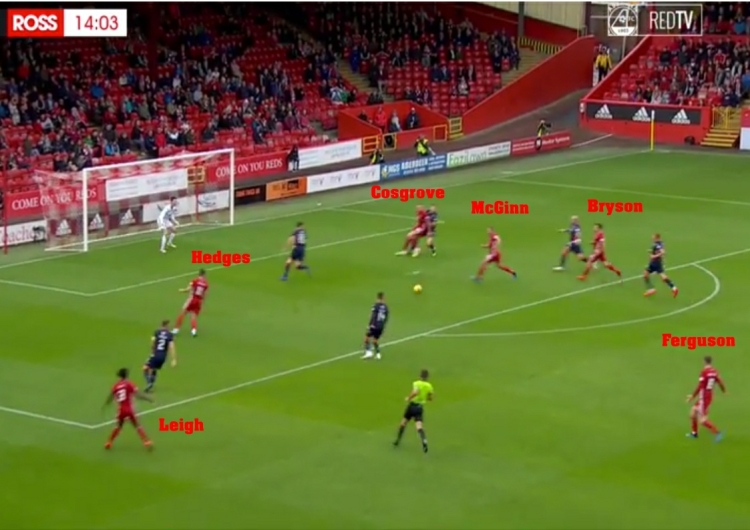 (Another example here of the overload, McGinn is just out of shot to the left providing width, Leigh this time can drift inside and Vyner provides the third body in the box, giving his teamates more to aim for than just Cosgrove, which has also been a fairly common sight.) 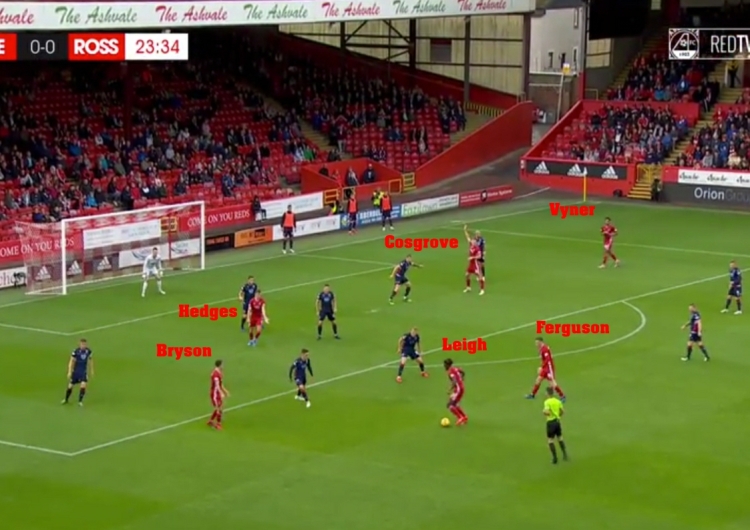 Again, a lot of this comes as a consequence of having Funso Ojo in the side. You could argue other players could do the role, as it does appear a lot of the benefits do come from the more balanced system, but many others wouldn’t offer the range of passing, patience and selflessness that Ojo has.

Not only does this get another body going forward, but often on Saturday afternoon the inward movement of either Hedges or McGinn meant Leigh had acres of space to run in to, and he’s certainly good at that. This didn’t just offer a threat as the wide man, or a midfielder then dropped back out wide to play neat passes with the full-back, but it also offers the Dons another viable option to get up the pitch.

Leigh was one of the chief progression men in the game, taking the ball from his own half and ending up on the edge of the oppositions penalty area without ever having seen the ball leave the ground – something season ticket holders at Pittodrie didn’t see nearly as much last year.

While in itself, the position that Ojo takes up, considering it has stopped Aberdeen playing a second striker/number 10, would appear negative – thus far, at least in most home games, it is allowing the Dons to play a more flowing, entertaining brand of football. It also offers more balance to the team, which in turn prevents the long-ball tactics at times.

No rules are hard and fast and constantly stuck to, so Ojo wasn’t always the deepest midfielder on Saturday – at times Craig Bryson might drop deep for the ball and Ojo would offer support out wide. This comes hand in hand with any Derek McInnes side, as creating confusion in the backline and having players roam the pitch with what seems like maximum freedom but is often strategic swapping of places is a favorite of  Mcinnes.

Time will tell how successful this style is, as seen from many of these stills, Ross County didn’t exactly put up much of a fight – but you can of course only beat the team put in front of you. The same style of football also saw the Dons put three goals past Hearts on the opening day, so at least going forward this system seems to make that jump in quality, but they also conceded two that day.

One thought on “Feature: How Funso Ojo is Changing The Way Aberdeen Play – Tactical Analysis”