In another edition of the League Lowdown series, Keiran Fleming gives you all you need to know about Portugal’s top football division.

The Primeira Liga or Liga NOS was founded in 1934 as an experimental league and in 1938 it became an official league. When football in Portugal was reformed in 1938, the league was named “Primeira Divisao”, this remained the case until 1999.

Porto were crowned the inaugural champions and they were able to retain the title the next season, along with Sporting Lisbon and Benfica, they are known as “ the Big Three” in Portugal.

Originally only teams from Lisbon, Porto, Coimbra, Setubal were allowed to take part in the competition. This changed in 1941 when two clubs from Braga and Algarve were admitted into league. The league eventually incorporated teams from across the country in 1945, when any team from whichever place could win a spot in the league, as long as they were promoted from the Segunda Liga (Liga Pro).

Benfica are the most successful team in Portugal with 36 league titles, Porto have the second most with 28 and Sporting are the least successful of the “Big Three” with 18 championships. The “Big Three” have failed to win the title on only two occasions, Belenenses won the 1945-46 season and Boavista were the 2000-01 title winners.

Benfica were also the first team to complete a season undefeated, in 1973, they won 28 out of 30 matches. They went undefeated again during the 1977-78 season yet they lost the championship title to Porto.

The Reds also hold 2 more records; they have the most wins in a row with 29 and they have the longest undefeated streak with 56 matches.

The “Big Three” are also the only teams in the league not to be relegated. Historically, they have also been the largest player providers for the Portuguese national team.

In 1999 the league went back to being called the “Primeira Liga”. 3 years later, it started getting combined with a sponsor’s name, this acted as income not only for the teams but also “Liga Portuguesa de Futebol Profissional” (LPFP). The LPFP is the governing body of both of Portugal’s professional leagues.

Liga NOS is the name of the top tier of Portuguese professional football. The Liga NOS contains 18 teams that play 34 games over the course of the season. At the end of the season the 2 teams with the least points are relegated to the Liga Pro and the 2 teams at the top of the Liga Pro are promoted. The title winners enter directly into the Champions League group stages, the runners up have to get through the playoffs to enter the Champions League group stages. The 3rd and 4th placed teams both qualify for the Europa League 3rd and 2nd qualifying rounds. The winner of the Taca de Portugal (Portuguese cup)  also qualifies for the Europa League. If the team that wins the trophy has already qualified for European competition the spot is handed to the club placed 5th in the league. 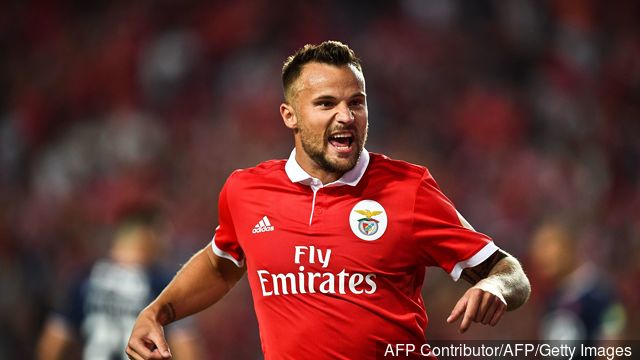 In his second year at Benfica the Suiss forward has made a huge impact. He has scored 21 goals in 18 starts making him the league’s top goalscorer this season. The 27 year old acts as a target man who holds up the ball and brings people into the game. This is shown by his 1.3 key passes a game and the 5 assists he has had in the league. Seferovic takes 3.2 shots inside the box per 90 showing that he is very good at getting himself into excellent offensive positions. The striker was linked with multiple premier league clubs last season including West Ham and Brighton. After a stellar performance this season it is very likely that the forward will be linked with even more clubs this summer. 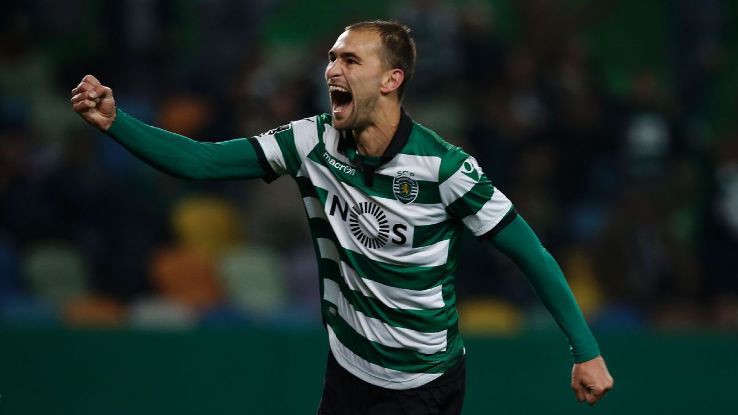 Bas Dost joined Sporting Lisbon from Wolfsburg in the summer of 2016 and he has been a key player ever since. In each of the last 3 seasons he has scored 15 goals or more. In the 2016-17 season (his debut season) he scored 34 goals in 31 appearances. This year saw him produce his lowest output of goals with 15 goals in 20 games.  The Dutchman is dominant in the air winning 4.8 aerial duels per 90. Using his brute strength he looks to bring players into the game with flick ons and hold on to the ball to allow runners to run off him. Although the striker is reaching the latter stages of the career at the age of 29 he is still being linked with a move away from Lisbon. Over the past year Dost has linked with a multitude of clubs including €60 million move to spanish giants Real Madrid this January.

Alex Telles joined Porto from Galatasaray 3 years ago. The left back acts as one of the key creative players for the current title holders. Although his defensive numbers are not exceptional, his creative numbers are. The Brazilian completes 2.5 key passes per game, only 4 other players in the league have completed more. The fullback also completes 3.3 crosses per game which is the more than any other player in the league. The 26 year old has 8 assists to his name which is the 5th highest in the league. Telles has attracted attention from some of the biggest clubs in the world with Bayern Munich, Borussia Dortmund, Manchester City and Real Madrid all showing interest.

The Sporting Lisbon captain has been the most outstanding player in the league by far. The attacking-midfielder has played a part in 45% of Sporting’s goals this season. The 24 year old has scored 19 and assisted 13 in the league this season which shows that not only is he creative but he is a clinical finisher as well. The Portugal international takes most of his shots from outside the box which shows how impressive he is from range. He is a dead ball specialist scoring 3 free kicks and 5 penalties this season. The goal-scoring midfielder has been heavily linked with a move to the premier league with both Manchester teams, Chelsea and Liverpool rumored to be interested. Fernandes looks as though he will be on the move for big money this summer.

The Centre-back arrived at the beginning of the season and instantly made an impact to Porto’s defence. The Brazilian makes 2 tackles and 2.2 interceptions per 90 but this isn’t what has made him one of the most promising centre backs in the world. The 21 year old is extremely confident on the ball, he is willing to dribble with the ball and pass out from the back. He completes 4.5 long balls per 90 which shows how effective he is at getting his team to transition from defence to attack. Although he has only spent one season in Porto, Real Madrid has already secured the services of the youngster for €50 million. Los Blancos hope that Militao can solidify their defence next season.

Dubbed the “next Cristiano Ronaldo” Joao Felix has certainly shown what he can do during his first season as part of the first team. The 19 year old is the most sought after talent in world football and it’s easy to see why. The teenager has scored 13 league goals and 7 assists in 19 starts. The Portuguese wonderkid has the eye for a pass, producing 1.6 key passes per 90. He is also very intelligent when it comes to his offensive positioning, he takes 2.4 shots in the penalty area per 90. Felix’s star performance this year was against Frankfurt in the Europa league quarter final. Even though Benfica were knocked out, the youngster scored a sublime hat-trick. Benfica have put a €100 million plus price tag on the star but this hasn’t stopped him from being linked with some of Europe’s footballing giants. Felix has been linked with moves to Juventus, Real Madrid, Barcelona, Manchester United, Manchester City and Liverpool.