Separate mini-league are beginning to open in the SWF Divison One North and Stonehaven Ladies are in one that’s battling relegation – but they are used to that in  this league, and they are more than confident they have what it takes to secure their safety.

It wasn’t the result they’d have wanted on Sunday, as they were beaten 5-2 by Cove Rangers – but they are very much aware that the main ambition is to take points from those around them – points against the other sides are a bonus in their ultimate objective to stay in the divison.

Six games in and Stonehaven join both Deveronvale and Westdyke with three points-a-piece. It might not sound like a fantastic return, but considering it was after the July break until Stonehaven picked up their first points the last time they were in this league, it’s an improvement.

Not only that, but the coastal side will be able to take a bit of confidence in the fact that not just are they in a cluster of sides on three points – below them are Raith Rovers without any points at all – and they play them this weekend.

Nonetheless, ahead of their trip to Kirkcaldy this weekend, Co-Manager Matt Smith spoke to NE98 about last Sunday’s result and how Women’s football continues to grow at all levels of the Scottish game.

Smith said of the defeat to Cove:

“I feel we were unlucky not to get a point from the game.”

“The Cove keeper made a fantastic save in the first half and we were punished for a simple mistakes and going in at halftime we should have been sitting at 2-2 as opposed to 2-1 which could have made the difference into the second half but it just wasn’t our day.”

Qualification for the World Cup and now a win over Brazil, things seem to be snowballing positively for the Women playing under Shelley Kerr for the Scottish National side.

“Continued success and media coverage of the women’s game can only have a positive effect on girls playing the sport going forward.”

“The national team are continuing to excel and we at Stonehaven ladies all hope they carry this momentum into France In the summer and do the nation proud, just like they did in Holland 2 years ago.”

Feature : Is Raw Talent Becoming More Important In The Modern Game Than Experience?

It wasn’t a great weekend overall for any side called Stonehaven – the men’s side in the McBookie Juniors Superleague now have a mountain to climb in order to avoid relegation.

A 2-0 loss in an absolutely crucial clash against Ellon United – who started the day rock bottom – means Stoney need a miracle. They have one game remaining, and even with a win in that, they’d need a lot elsewhere to go their way.

Now Stoney will wait until the 27th to play their final game of the season against Hermes – with a host of fixtures that could relegate them taking place in the meantime.

As of now, Martyn Rollo’s squad sit second bottom (The second and final demotion spot) one point ahead of Ellon, having played two games more.

To simplify things, Stonehaven require a win against Hermes with a combination of any two of Ellon United, Dufftown, Hall Russell United and Maud losing all of their remaining fixtures.

Between now and next week’s ‘Mearns Football Weekly’ Hall Russell will travel to Bridge of Don Thistle, Ellon United will host Dufftown, Maud host Nairn St Ninian with Dufftown then also hosting Nairn in the mid-week.

AC Mill Inn were knocked out at the quarter-final stage of the Aberdeen FC Trophy on Saturday after a 3-2 loss to Insch.

It’s been a mixed bag for Cowie Thistle lately in the Amateur Premier Divison, they beat MS United 4-2 at the weekend with Cran scoring twice – but Insch completed a quick-fire double on Mearns side on Monday evening, earning themselves a 1-0 win over Cowie.

“A much needed, but in the end deserved 3 points, a great 2nd half team performance after being behind at half time.”

However, the losing display on Monday had this reaction:

“3rd game in 6 days didn’t help with numbers small at the moment, credit to those who did turn up and put the effort in tonight, but got to pick ourselves up for 4 big games to end the season against the league’s top 3.”

Cowie do still sit second – although Woodside will very likely overtake considering their massive amount of games in hand – but Cowie will still have eyes for third place, but that isn’t secure.

St Laurence were on the losing end in the same divison this past weekend – a 1-0 loss against table toppers Sportsmans Club.

“Our performance deserved at least a draw but credit to Sportsmans for getting in front and grinding out the result.”

St Laurence still sit 7th, with a game left to play – they aren’t safe from relegation yet with other sides having games in hand, but certainly have the odds on their side to secure survival.

Bervie Caledonian had a big task ahead of them on Saturday In the Division One North. Newburgh Thistle are already promoted as champions, they’ve not been beaten all season and they have yet to drop a point at home – so it’s not particularly shocking that they thrashed Bervie 5-0.

Bervie are now six points behind Rattrays XI, who sit in the final promotion spot, but they do have two games in hand. Even winning those probably won’t make up the goal difference, so even if they win both of those, they’ll need to better Rattrays points total in the final five games.

Stonehaven Athletic had the weekend off in the Divison Two North.

Stonehaven YFC’s Under 19’s were beaten 4-1 by Banchory Eagles in the B League on Saturday. The under 15’s also came out on the losing side on Sunday, beaten 2-1 by Colony Park on Sunday. The Under 14’s however thrashed Huntly 8-2 in the Spree League section one.

*FIXTURES TO BE ADDED ONCE ALL ARE PUBLISHED* 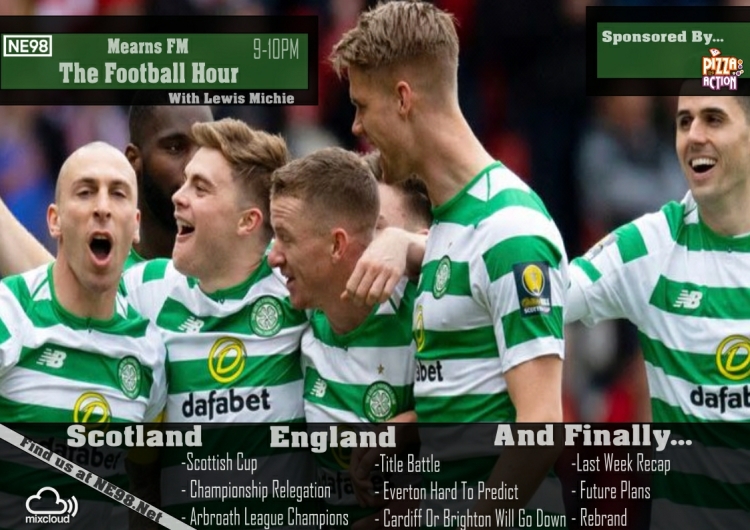